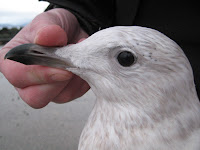 Happy new year to all! The new year started really good for Urban Ringing, Bergen with our second ringed Iceland Gull (Larus glaucoides). The bird was discovered by Frode Falkenberg on 30th of December at Osøyro 30 kilometres south of Bergen. There was two first winter Iceland Gulls at the site but only one of them was feeding on bread. On New Year's Eve we decided to make one of these Iceland Gulls our first ringed bird in 2012. A success would also make us the winner of the Iceland Gull bet we made the 27th of November. When we woke up the weather was really bad with heavy rain and we feared that the the catching would rain off. However in the afternoon we headed of to Osøyro when the rain seemed to stop for a moment. When we arrived we found the bird immediately and after one failed try we caught it.

Compared to the one we caught 27th of November this one was in better condition. It's body mass was 675 g and when handling the bird it felt like it had more fat because the breast bone was not particular sharp. In comparison the gull from the 27th had a body mass of only 520 g which is below the rage given in literature. Glutz von Blotzheim and Bauer (1982) give the range 620 to 735 g for first winter females. The sex is unknown for both individuals, but analysis of the blood samples will later give us an answer.


When Frode found the bird the 30th of December he noted some black spots above the eye and assumed this to be parasites. When the bird was ringed we could have a closer look and soon became quite sure that the spots was bird louse or Mallophaga. We sampled some and will take them under the stereo microscope and try to determine the species. It is interesting to see that the Ross' Gull (Rhodostethia rosea) in south western Sweden also have similar dark spots on exactly the same position above and behind the eye. When birds are infested with ecto parasites like Mallophaga they tend to be more visible in the head because this is one of the most difficult body parts to preen.

2012 started perfect and 2011 ended with 72 gull readings on the 31st of December (most Herring and Mew Gulls) which is a new all time high for Bergen. A small ice cap on the lakes and sunny weather are the two most important reasons for this. The 31st was also the first day without rain since 7th of December and the rain have really been pouring down on the majority of these days.
Posted by Urbpop Bergen at 23:02