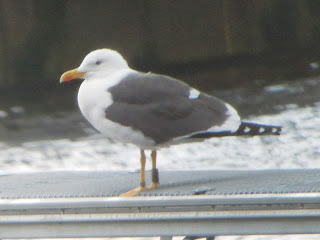 One day more in Anza with perfect conditions but where are all the gulls? The number of gulls were extensive reduced compared to earlier. The production was still on in the sardine fabric so this can not be the reason. The day was less productive than the last couple of days but we still managed to get a few new readings. Here are some pictures of today's gulls.

Anza and Agadir harbor schedule of the day 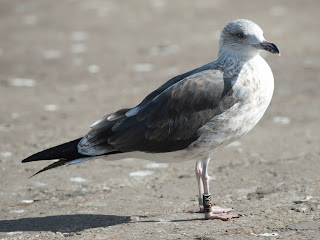 Today the conditions were the same, perfect in the morning and windy and difficult in the afternoon. At lunch we decided to check Agadir fishing harbor. We have earlier had problems getting trough the security because our french is rather poor. The paper in french saying what we are doing and pictures of ringed gulls was every handy and because of this we passed the security gards in just some seconds. In Agadir harbor the gulls were very trustful. We could just drive the car and photograph ringed birds. The number of gulls were only some hundred but we got a really nice bird here. JJ6K appeared just 5 meters from our car. JJ6K is a Lesser black-backed gull ringed as a pullus at the island Fedje in 2011. One of Morten Helbergs LBBG with geolight logger was also one of the highlights of the day.

In total the day produced 30 LBBGs ringed in Norway which takes us to 62 in total for the trip.We have also summarized Roland-Jan Buijs birds and for the present the number is 51.

Posted by Urbpop Bergen at 23:57 No comments: 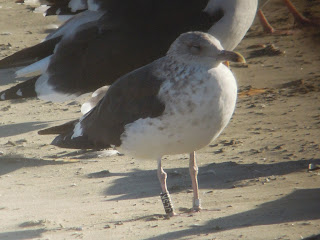 Today we started at Agadir beach in the early morning hours which gave some good readings. After a quick breakfest at the hotel we continued in Anza where the conditions were perfect with almost no wind and good ligth.

In the afternoon the wind increased and we were close to give up when a really good bird showed up. JC5K suddenly appeared in the middle of the pack. We ringed this bird in the city centre park in Bergen in 2011 as a 1 cy, read it in Anza in February 2012 and now again here in Anza! Perfect!


We also had one of this years birds from the city center park in Bergen, JM9Y. 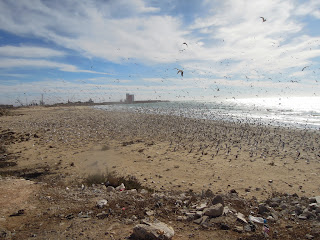 This year we repeated last years success and went for a new trip to Agadir, Morocco with the main goal of reading gulls in Anza. This year together with two cars from Mandal and one from Karmøy. The three other cars vent not surprisingly to twitch non-gull species like Dupont's Lark, Houbara Bustard and Pharaoh Eagle Owl a long long drive into the desert but Christian and me vent for the real thing which of course is ring reading in Anza ;-)

The fish factory was not open on a Sunday, but the nice fishy smell was still there and the gulls were numerous. The only problem today was the heavy wind from east and north east which made sand storms in Anza now and then.

The best bird of today was J0KV which is an acquaintance from Realfagbuilding at University of Bergen where is was ringed in May 2012 and breed on the same roof in 2013. Very nice to see this bird in Anza. In total we had 25 different norwegian Lesser black-backed gulls which is 7  more than the first day in Anza in 2012. We also had 18 of Roland-Jan Buijs's tibia ringed LBBGs.

Tomorrow the weather forecast promise less wind and the fish factory should be open so hopefully we get many more readings.

Posted by Urbpop Bergen at 23:43 No comments: 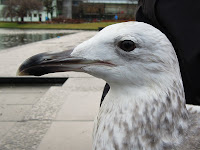 The 5th of January is with out doubt one of the highlights in our gull ringing career. We managed to ring a gull we think is a Caspian Gull (Larus cachinnans). The possibility of a Caspian x Herring Gull hybrid have not been ruled out yet, but this will be very good bird here in Western Norway anyway. Our gull year started on the 4th of January when we ringed a 2 cy Iceland Gull (Larus glaucoides) at Osøyro. Yesterday we searched our local spots for more white-winged gulls. We managed to find a new 2 cy Iceland Gull in a freshwater outlet in the fjord outside Bergen which was not interested in bread at all. However, back to the Caspian gull. When we threw bread to the around 150 Herring Gulls (Larus argentatus) in the city centre lake in Bergen a white headed gull draw our attention. Could it be a Caspian or was it just an odd looking Herring Gull. We took a few snapshots and decided to catch the bird to get in hand documentation, measurements and a blood sample. The bird was very hungry, so the catching was relatively easy. Well at home that evening we started to read the available Caspian Gull identification papers and contacting the gull experts we know. As the evening tuned to night we was quite convinced that the bird could be a Caspian Gull.

This bird is our second bird to be ringed in 2013, so if the experts agree for a Caspian Gull we have a really good start to the new year. Also if accepted as a Caspian Gull this will be the first ever ringed in Norway and also the second observation of this species in Hordaland county. 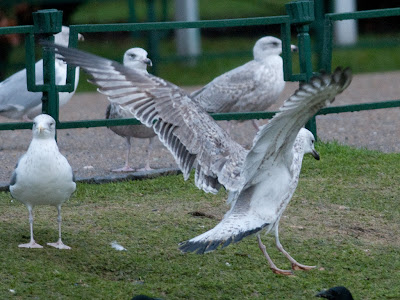 The comments from the national and international experts are so far promising. Chris Gibbins the author of two extensive identification papers on Caspian Gull think the bird looks like a Caspian Gull. The other comments can be seen at the gull-research forum.

We are greatful to Morten Helberg, Kjeld T. Pedersen, Alf Tore Mjøs, Frode Falkenberg, Chris Gibbins, Theo Muuse and Jan Jörgensen for comments and help with the identification of the bird.
Posted by Urbpop Bergen at 19:16 No comments:

Results from the Morocco expedition

After we came home from Morocco and got used to -10 degrees and snow, the long dark evenings was used to punch the gull readings in excel. This work was more extensive than expected, which of course is most joyful. The total number of readings was about 735 of 367 different individuals. The e-mails with observations are at the moment sent to the different project managers and we are really looking forward to get the life histories and ringing informations. When this information is received and we have done some computing we will give a summary of the results as a post on this blog! The summary for the different 'countries' are as follows:

The species was dominated by Lesser Black-backed gull (Larus fuscus) followed by Audouin's Gull (Larus audouinii)
We will end this blog with a picture of the reading that in our opinion was the best for us. This male Lesser Black-backed Gull JA8K was ringed on top of the Science building at University of Bergen. He incubated on three eggs but we do unfortunately not know who his girlfriend is. If he stick to her one more year we hopefully get more information in 2013. This picture was taken on the last observation date in Bergen 20th of August 2012. 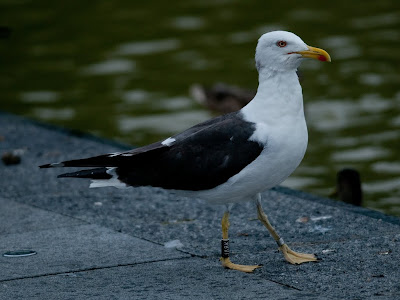